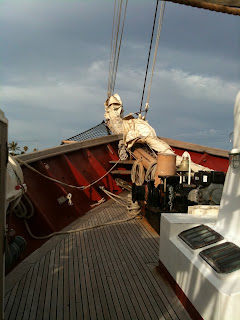 SEA (Sea Education Association) from Woodshole has published the longest running research on plastic accumulating in the N. Atlantic gyre in this months edition of Science Magazine and has been getting much deserved publicity this week. Scores of friends and family have shared the many different venues of SEA's coverage. Thanks for the heads-up by Danny Barefoot, I found the radio interview with Kara Lavender Law on NPR. 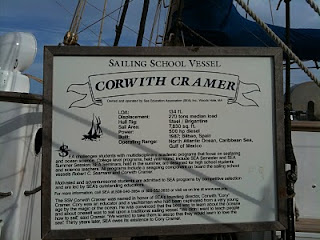 After learning about Algalita Marine Research Foundation two years ago, I wanted to know if the plastic was accumulating in the Pacific, was it accumulating in the Atlantic. That is what inspired my research because no one was talking about there being a problem in the Atlantic. This January I presented with Kara Lavender Law in Oregon and found out about their 24+ years of data.
This summer they found 1069 pieces of plastic in just one half hour tow and we hope to reference their work with what we found once we work up our samples. Upon returning from our open ocean voyage in the N. Atlantic our ship this July, we parked next to the SEA's ship Cornwith Cramer and we had the privilege of touring the brigantine. I thought I might share some footage from our tour. Pardon the shakes with the iPhone - what you see mostly is their science lab.

This is a sailing vessel so you can only imagine how much work goes into putting up the sails along with retrieving samples and running experiments. Here you'll see just how much line in on board as the captain explains how they deploy their manta trawl off the side of the ship.
Here we have the living arrangements below. Note the bookcase on the fore wall and the sleeping bunks or berths along the walls in the common area where they eat and socialize.

What needs to be mentioned here is that SEA has been looking at plastic in the marine environment for over 24 years, yet their finding were not publicized until this year. Unlike Captain Charlie Moore, a person who not only observed the overwhelming amount of plastic in the ocean, sampled it, learned of its high concentrations and the devastation it brings to marine life, but he took his findings to the press because he knew the only way to stop it was to let the general public know there was a problem. Sometime scientists gets so caught up in the study that they leave out the importance of letting the public know their findings. Sometimes its due to the media getting it wrong either by over stating or sensationalizing or misquoting bringing embarrassment to reseachers.

Scientists have been studying plastic in the marine environment since the 70s and yet it wasn't until Algalita Marine Research Foundation got it to the mass media has it gained any awareness. Thank you Charlie Moore and Algalita for not only bring this issue to the forefront for me, but also for inspiring the research of SEA to bring their findings to the general public!
Posted by theplasticocean.blogspot.com at 7:16 AM 5 comments:

It’s been a month since our second voyage into the North Atlantic gyre. We have been having problems with our blog and between preparing samples, giving talks, the day job, and family the blog has sat unattended. 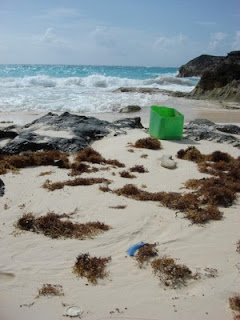 Sorry for the delay. Part of the problem has been having so much to say and needing some time to get to it. So I’ll start with this, plastic is energy and it takes energy to collect this energy, just like drilling for either natural gas or petroleum. The difference is, this energy - plastic energy - is much easier to get to in most places, except of course the middle of the ocean. Not because there is a lack of plastic in the out there, it’s that we have access to this resource in our trash cans, landfills, on our streets and beaches. In Bermuda, plastics from the continental rim (US, Canada, Europe, and Africa) end up on their beaches. It’s like oil in that it floats, destroys marine life, and is a waste of a commodity. Wait, did I just call plastic a commodity?
This picture illustrates the beauty of Bermuda’s water, yet , look closely at all the plastics that has washed in. Plastic trashing beaches when it can be turned into electricity and fuel.


Whale Bone Bay in Bermuda is on the North 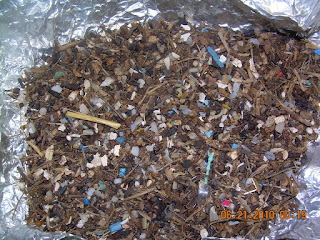 Eastern lee side/windward side that faces the direction of the N. Atlantic accumulation zone. Here is what a portion of one cubic meter collected off this remote beach looked like. Note the amount of plastic intermingled with natural debris.

After sorting it as best we could, leaving much of the plastic fragments less than a millimeter behind, here is the quantity of plastic we plucked from just one meter of beach. Wasted energy . . . 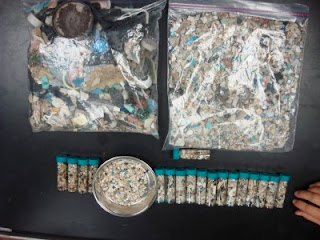 The bag on the left is the large items we were able to pull from the sample. The fragments on the right is what we had to use after we filled 18 vials. The vials left of the bowl are all nerdles (pre-production plastics) industry uses, yet Bermuda does not have ANY industry. Clearly brought in by the sea from a far away place.


Energy from plastic comes in other forms as well. When I first learned about the problems with plastics in the marine environment my original thought was a full length documentary, like "An Inconvenient Truth." Of all the environmental issues our oceans are facing, this one is the easiest to fix. It's just going to take some education, legislation, and motivation. First we've got to educate people about the problem, get legislators on board, and motivate people to reduce the use of plastic. My next post will tell you how we got involved with the production of "Plastic Oceans" partially funded by National Geographic and WWF. I had the privilege of rooming with the Producer-Director Jo Ruxton, former underwater videographer from BBCs Blue Planet and she is putting all her energy and several million dollars into a much needed full length documentary. 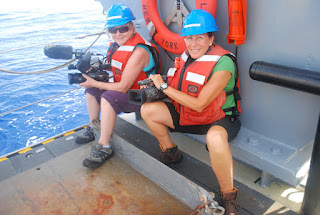 Posted by theplasticocean.blogspot.com at 3:22 AM 3 comments:

There's a bit of a water hazard on this one 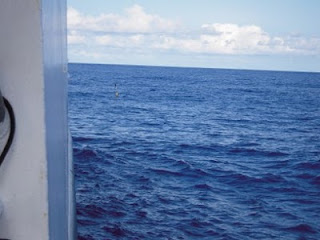 One of the draws of being at sea is that you never know what the day will hold; whales, waterspouts or rare fish could be just ahead. Many times, however, the next notable object to float by is manmade.

During a net tow, Pam noticed something floating just ahead of the ship. At first glance it looked just like the flags I see marking the hole on the golf course behind my house, but surely no golf courses have been built at sea, right? It turns out it was a buoy with a pvc pipe attached and a black flag flying on top. 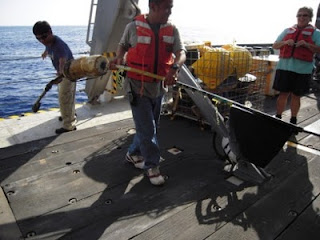 The crew grabbed it as it floated by, and our best guess is that it was a fishing industry marker of some sort. It said “M-FL” - Miami, Florida? If anyone knows anything about this object, we’d love to hear it.

Other large, identifiable items that floated by during the cruise: A jug, which looked like something that held antifreeze, etc. 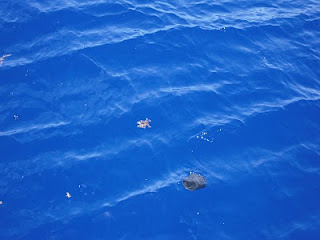 A black plastic container for plants.
Please excuse the font and spacing issues. We are working to resolve these.
Posted by Jennifer O'Keefe
Posted by theplasticocean.blogspot.com at 5:55 PM No comments: