Why Plastic in the Ocean Sucks for Marine Life 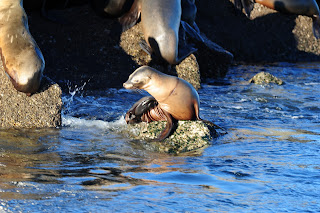 A little over a year ago, I reported on my witnessing a sea lion who was nearing decapitation from one strand of fishing line.  It took her 6  months to heal and will forever be scarred.  She was released in March '09  and I found this picture on SeaWeb Photobank and I'm confident its her in the wild judging by the huge scar around her neck and large scar patch above her left flipper.  She's a success story.  See how thin she was in a video from a previous post. http://theplasticocean.blogspot.com/2009/11/more-on-segway-sea-lion-fishing-line.html
﻿
﻿Check out her and James Dean's, her boyfriend, in the linked below.  James Dean was another victim to fishing line only he lost one of his eyes.  See how thin they got and how well they regrained their size thanks to the awesome team at the Pacific Marine Mammal Program in Southern California.  Check out the link below of their release.  They will move you.﻿﻿﻿﻿﻿ ﻿﻿﻿﻿﻿﻿﻿﻿﻿﻿﻿﻿﻿﻿﻿﻿﻿
﻿

Here is another story of a rescue and how litter has become a death trap for many marine animals.
﻿﻿﻿﻿ Seal pup saved after horror injury as litter fears worsen

﻿﻿AN injured seal has had a miracle recovery as experts warn they are under threat because of a rising tide of litter off the Scottish coast. Specialist vets say they are shocked at the increasing number of life-threatening injuries caused by balloons, discarded fishing gear and plastic bags.

﻿﻿﻿﻿In the latest incident an eight-week-old seal pup narrowly escaped death after his neck became tangled in a discarded fishing line. The pup - nicknamed Ringo by staff at the Highland Seal Hospital in John O'Groats- suffered the injury as he ventured inshore looking for fish.

Hospital manager Jamie Dyer said: "Marine litter and discarded fishing tackle is a real problem. Balloons are also now a big issue as well - we've found a lot in seals' stomachs."Discarded plastic bags are a growing problem - turtles eat them thinking they are squid or jellyfish.
"We save about 30 seals a year and some have terrible injuries. Ringo is lucky to have his head still on.
﻿﻿"We are hopeful he can pull through. In addition to the neck wound, which is healing, he also has liver and gall bladder problems. He'll be with us for while."  Ringo was found exhausted and close to death by ferry terminal worker Marion Jack at Gills Bay in Caithness.

﻿﻿He had a gaping 14in wound, 2in wide and nearly 2in deep, just a fraction from his spine.  He was given his name by hospital staff because of the almost circular wound around his neck.  Ringo has been given ultrasound scans, antibiotics and pain-killing injections to help him survive.﻿﻿

﻿﻿Jamie added: "He's very lucky - the wound was close to severing the tendon by his spine. He then would have lost motor control and the ability to keep his head out of the water.

﻿﻿"I have never seen such injuries before where a young seal has survived. The fishing line almost decapitated him.  "But he is making steady progress. The wound is very nasty but hopefully he will recover fully."

﻿﻿
Posted by theplasticocean.blogspot.com at 2:25 PM 2 comments:

Most of the time, it's what you get passionate about is what makes you feel alive.  I mean that from the simplest sense.  Caring about things outside of yourself can be the most rewarding, and sometimes those rewards come back.  I have met Ginger Taylor a few times and was thrilled to see that she has been acknowledged for your passion.  Like Danielle Richardet, a local person who has been taking plastic pollution head on and earned her a film in the recent Sundance Film Festival, Ginger is equally committed.  Below is her story in the local Lumina News and is a feel good story from my blog for a change.
by Marimar McNaughton
Thursday, February 17, 2011
Nancy Faye Craig is a tough act to follow any day of the week. Since 2003 when the Town of Wrightsville Beach named its Volunteer of the Year award in Craig’s honor, many individuals have followed in her footsteps.
This year’s recipient, Ginger Taylor, Wrightsville Beach Sea Turtle Project volunteer and author of the seasonal weekly blog-style newsletter, "Trashy Talking Turtlers," was the board of aldermen’s unanimous choice.

Taylor, taken by surprise, was presented with a plaque at the Feb. 10 meeting of the BOA.

"I certainly feel so appreciative of receiving this award and just had no idea that I would ever be considered—a true honor to be associated with Nancy Faye Craig," Taylor said.

"I want to share this award with all of the other volunteers who have worked so tirelessly in keeping our beach clean and raising awareness. These volunteers include the WBSTP and the Cleaner Greener Committee and others who often work with no recognition whatsoever. I really feel I have been carried on the backs of the WBSTP volunteers and others because without their work, input and enthusiasm I would have never been able to do all that I have."

Taylor said she also appreciated the board of aldermen for being willing to hear her thoughts and express her opinions and for giving issues like litter awareness its consideration.

"I am proud that WB is working toward improving on what most would describe as an already beautiful beach," Taylor said.

You deserve it Ginger and thank you for all that you do.
Posted by theplasticocean.blogspot.com at 6:35 PM 3 comments: