Hurricane Gonzalo Stirs Up the Sea and Spits Out Plastic 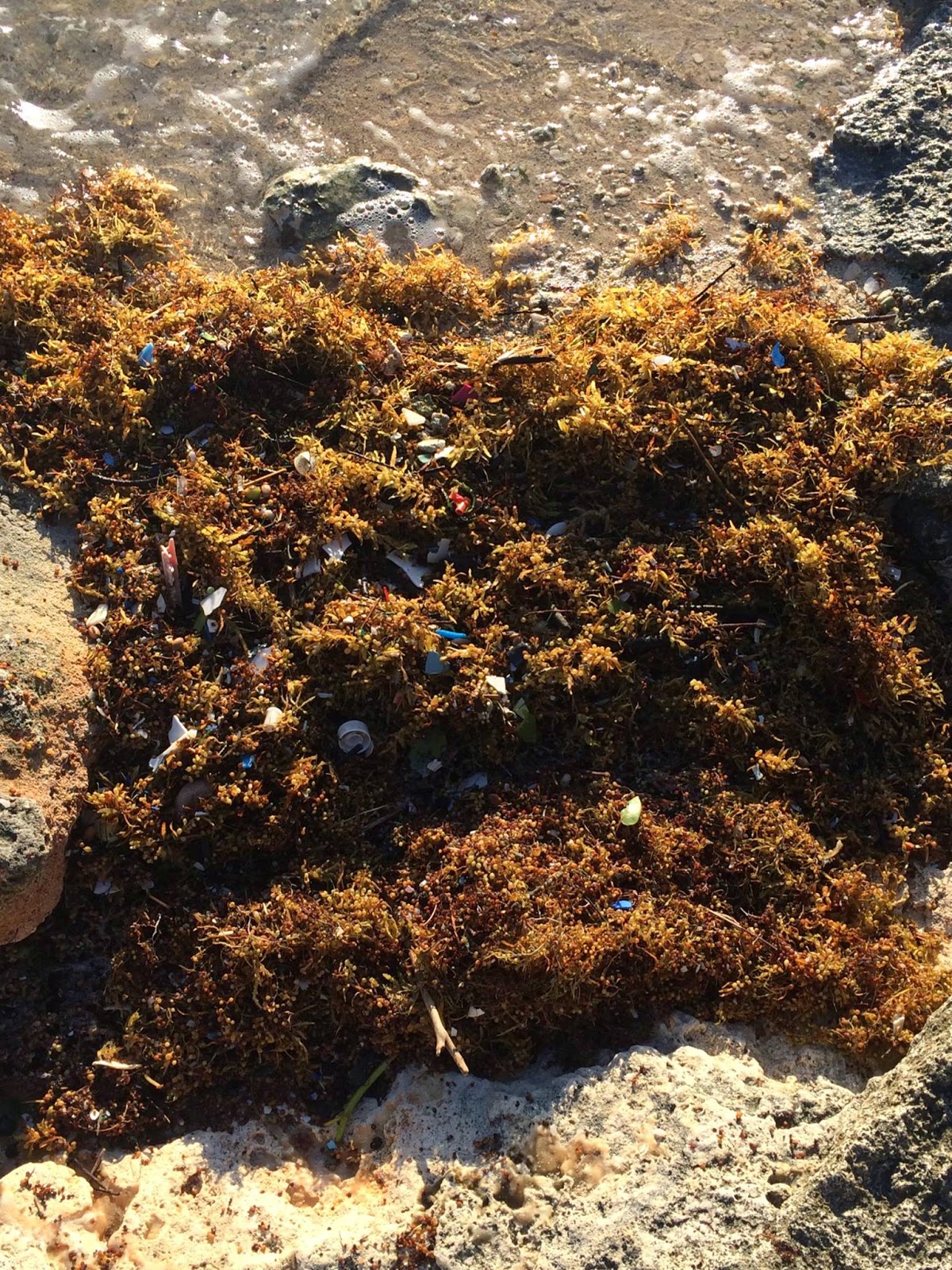 When we signed on to do our fifth year of sampling in Bermuda we had no idea that this year we would have an opportunity like no other. We were provided the chance to sample beaches before and after a hurricane, when does that ever happen? And exactly what we hoped we wouldn't find we found, but we were glad we were there to document it.

Hurricane Gonzalo ripped through Bermuda and what washed in wasn't pretty. The sargassum was full of plastic particles, the pictures don't do it justice as the whole beach was covered with sargassum just like this. It's so disheartening to see this outcome, as if we needed another eye-opener.  To know that animals are mistaking these pieces of plastic for food, and even if they weren't and they were to go eat a piece of sargassum they would end up with plastic as a side dish. To me that seems like being at your favorite restaurant and finding a short and curly in your favorite dish, not appetizing and definitely not healthy. 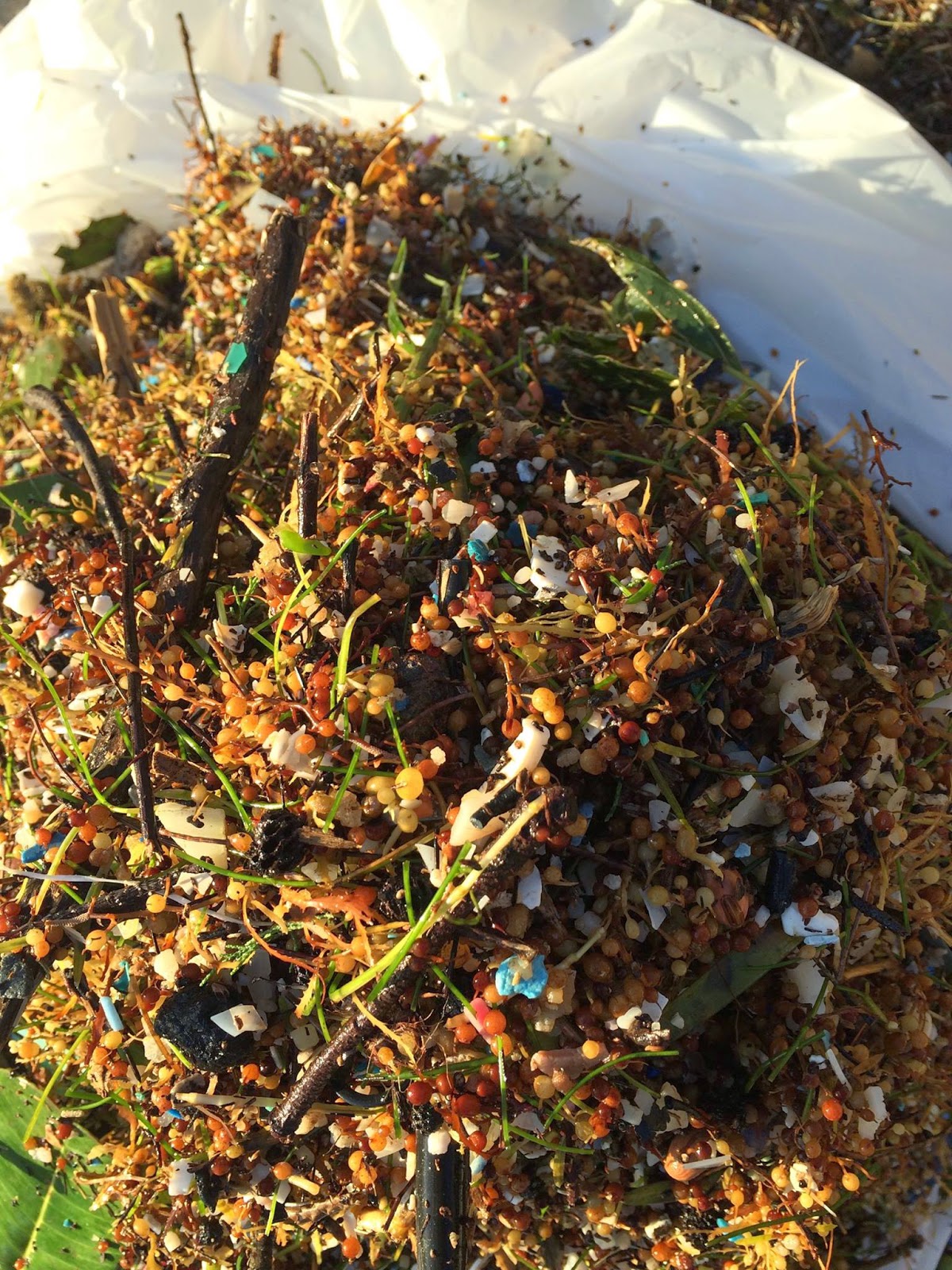 Bermuda wasn't the only island to get hit, and they are certainly not the only island with plasticized sargassum. They've all started their clean ups on the islands, but the clean up needs to start now in our everyday lives. How are we going to stop this from taking over our beaches our oceans?

It is time for us to head out to sea, to see what Gonzalo has in store for our next few days of surface sampling. I'm curious to see in the aftermath of a hurricane what the trawl will come out with. Will we see what we saw on the beach or have the rough seas hidden the problem just under the surface? We'll find out and let you know soon.

Written by: Tricia Monteleone
Posted by theplasticocean.blogspot.com at 9:18 PM 2 comments:


You might say Plastic Ocean Project has been getting around! Two weeks ago we surfaced sampled Pyramid Lake in Reno, NV, had a beach cleanup at Santa Monica Beach, CA organized by high school student Leyla Namazie, combining forces with St. Mary's College and Heal the Bay, collected trash while visiting with Ocean Defenders Alliance, Huntington Beach, CA, and currently joined Beautiful Nation Project in Bermuda to show students from schools around the world how we study plastics in the ocean.  Phew, its been busy.


Cleaning up the environment needs a lot of players.  From educators like Tonia Lovejoy and Shanon Hagon, Beautiful Nation Project, teaching children around the globe about ocean issues through STEM to caring people like Kurt Lieber, founder of Ocean Defenders Alliance.  His crew works on cleaning up the bottom of the ocean from dangerous lost fishing gear that capture unsuspecting prey that feeds on animals trapped in the net and then often times get entangled as well.  More and more people are stepping up to organize cleanup events and getting involved in studying all bodies of water for plastics including lakes. Thanks to Mark Gandolfo and Nancy Vucinich, who helped us work with the Paiute Indian Reservation that allowed us to sample Pyramid Lake just outside of Reno, NV. 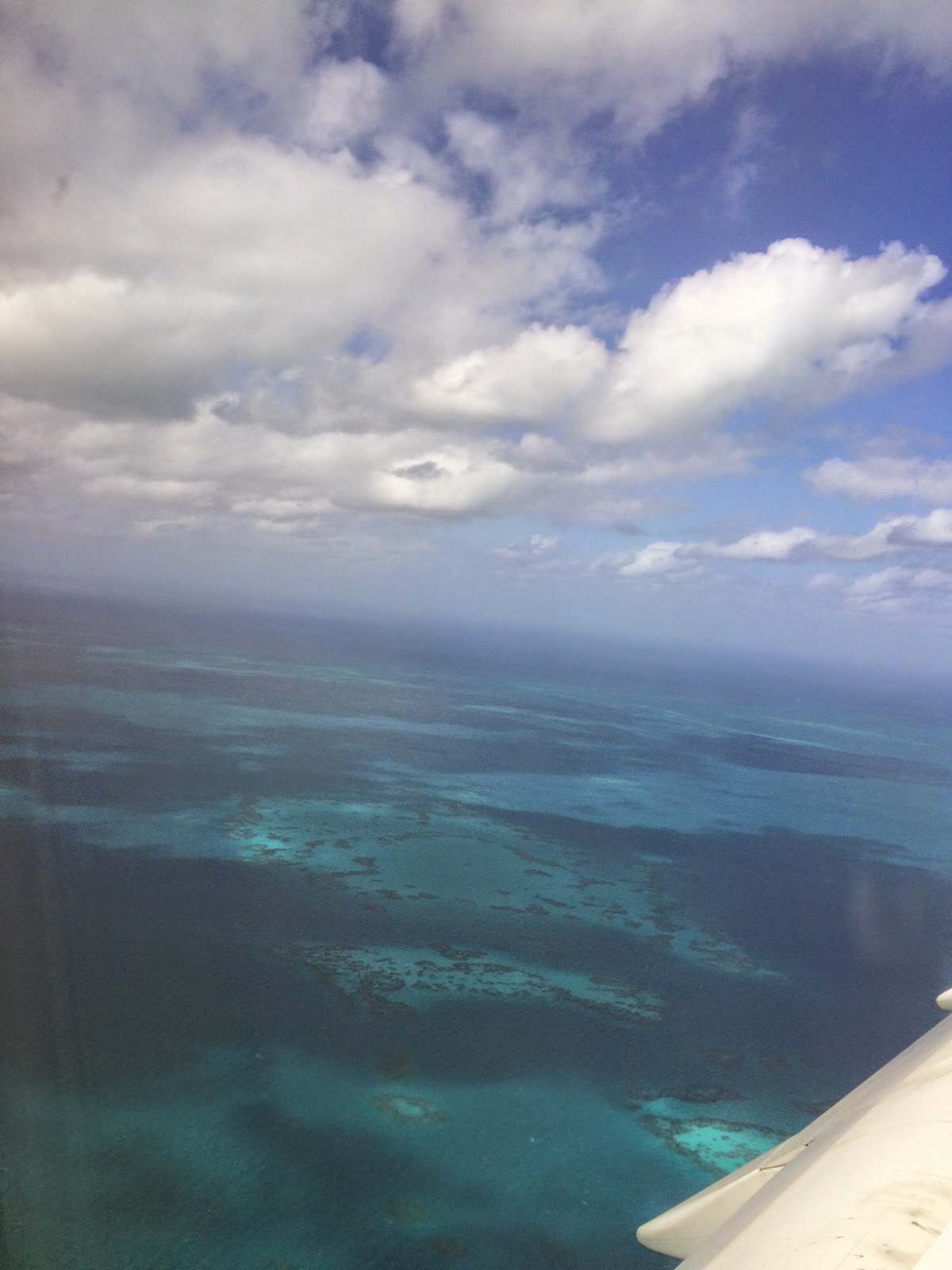 Thanks to the funding from Project Aware who funded our plastic trash art exhibit, we successfully delivered "What goes around, comes around" to southern California where it will go up on display at the Aquarium of the Pacific come December 1st.  Another success, thanks to the generous contributions from people like you, singer-songwriter Jack Johnson matched donations of $2500 so we can continue the work with so many people across the country and across the pond to Bermuda.  We will be going out to sea with Bermuda Institute of Ocean Sciences working around the hurricane that is headed this way.  Stay tuned!

We will begin our surface sampling tomorrow so stay tuned to see what the Tropical Storm Fay might have dragged in.
Posted by theplasticocean.blogspot.com at 2:54 AM No comments: 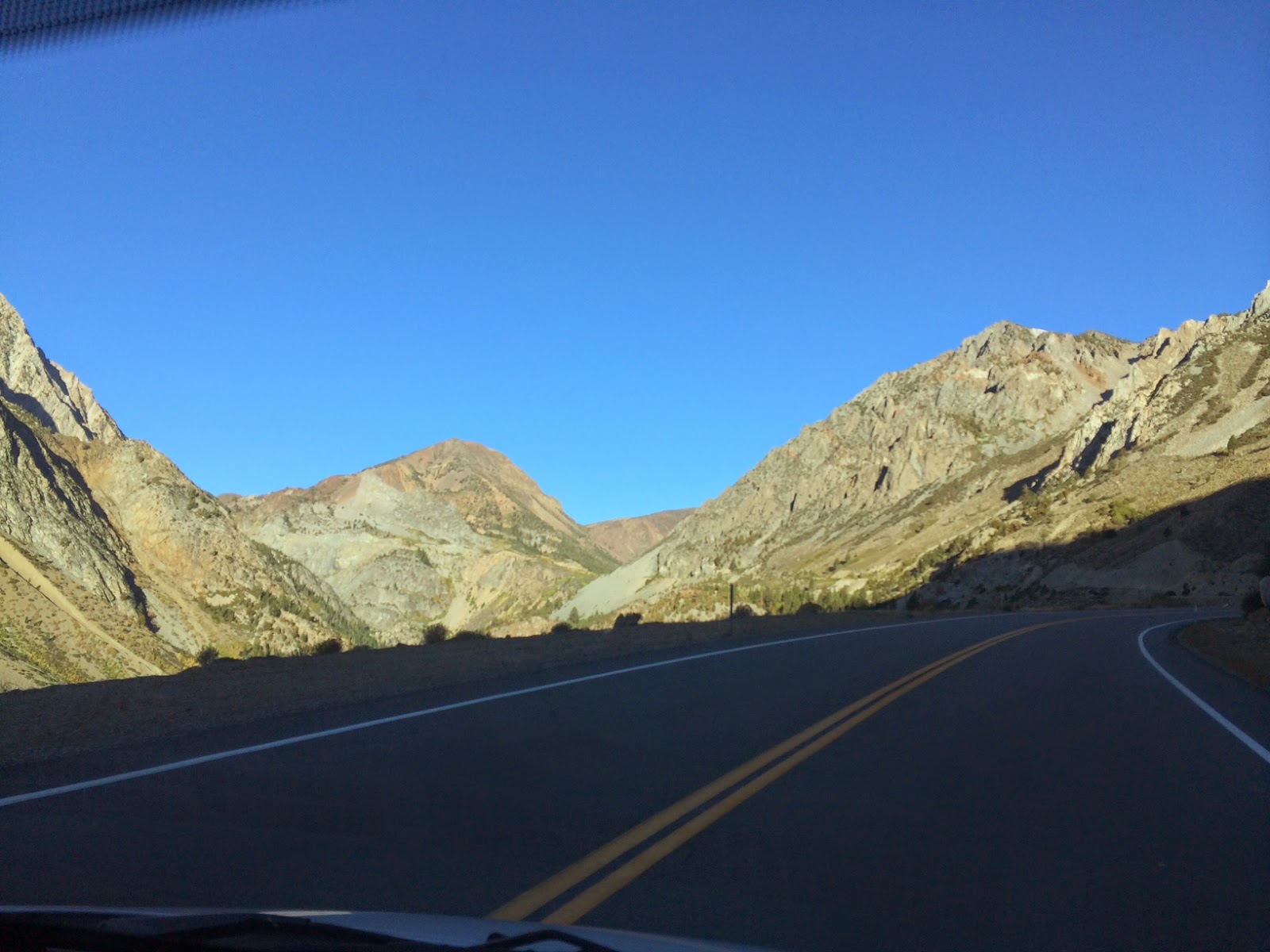 Since February, our 25’ canvases of ocean waves have been rip curling up and down the East coast, across the center, and on to the West coast of the United States.  We drove over 5000 miles meeting countless people along the way, handing out business cards at gas stations, small shops, to people that attended our presentations, and to those at the river and ocean cleanups we took part in.  The energy has been contagious, something to the variety of what Wallace J. Nichols might call the Blue Mind. If you haven’t picked up his New York Times Best Seller yet, and need an uplifting book on the power of water for mental as well as physical wellbeing, get it.   It’s true what he says about the power of water.  One of my first questions I ask my audience when I give presentations is, “You are here to learn more about plastics in our oceans, why does it bother us so much?”  I know it did me.”  I think it is primal.  This concern for our water drove my conscience to want to travel in and around 4 ocean gyres, to create art out of the trash I collected in those regions, and to want to bring the images of trashed seas inland and across the USA to inspire the conversation.  Where is away when we throw our plastics away? Why do we, and more importantly, why should we care?  Believe me, there are a lot of caring people out there.  And it all comes back, I think, to the primal need and love of water whether we are drinking it, soaking in it, or playing in it. 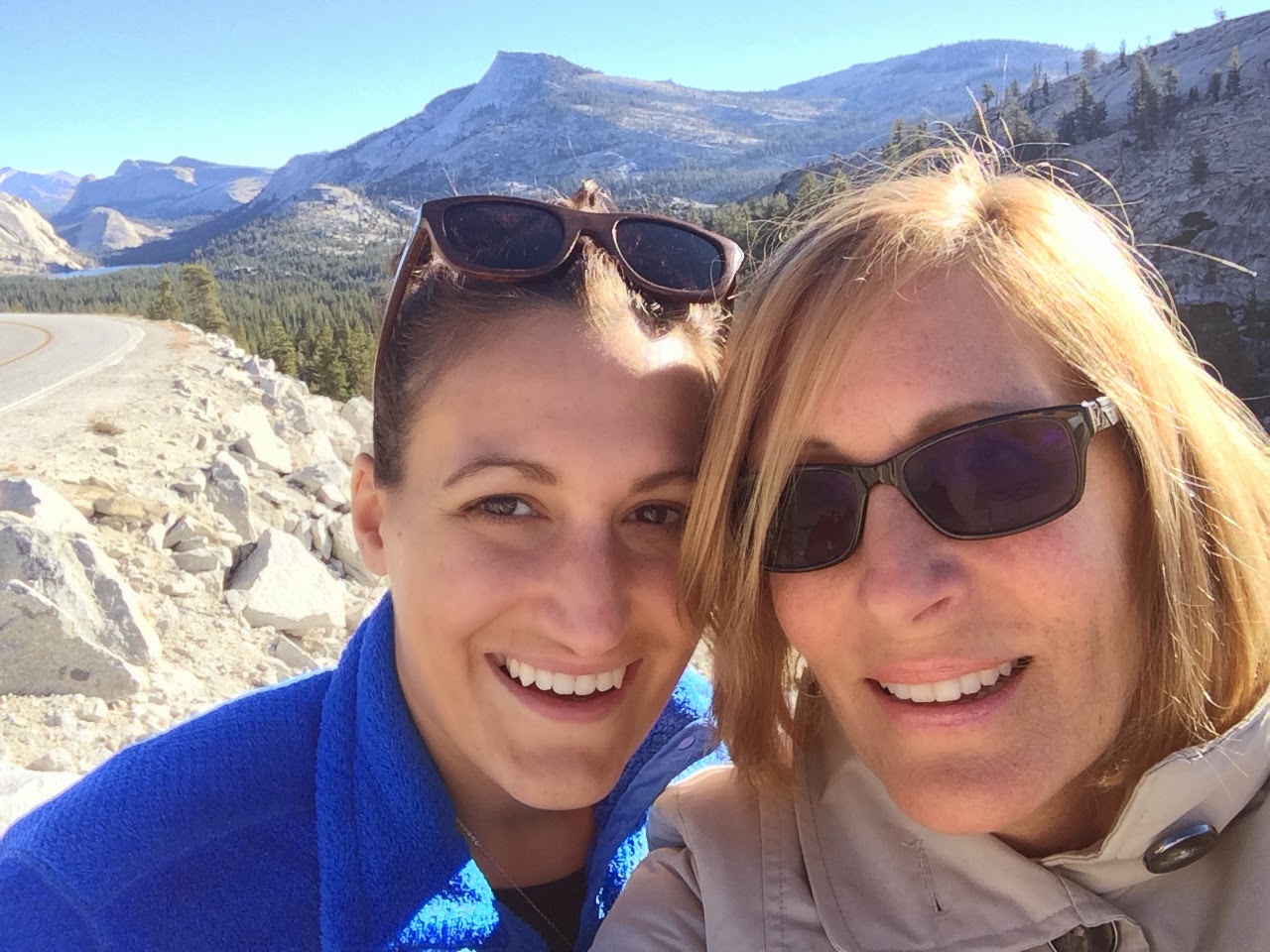 After picking up our exhibit, “What goes around comes around” from the University of Nevada Reno to take it to Southern California, my daughter Tricia and I had a choice to take either Rt. 5 down the California coast, through the Sierra Mountains on Rt. 395.  Tricia’s route won the toss.  We thought we would drive until 1 or 2 in the morning, but found out the hard way that the small town hotels do not leave the light on after midnight so we were forced to drive  hours into the night with no place to stop along the dark, lonely desert road.  Oh but the stars, I felt like I was back out on the open-ocean because there was no ambient city lights to distort the view.  We gave in to Morpheus at about 3am pulling into a closed gas station to hunker down.  With the van full of art we slept sitting upright in the cold, dark desert.  Even the best laid plans . . . .

We awoke to the sun creeping over the mountains as we watched the long jagged mountain shadows gently shrink to yellow beams of light over Mono Lake.  Little did we know we parked just feet from the entrance to Yosemite National Park.  We couldn’t resist a detour. 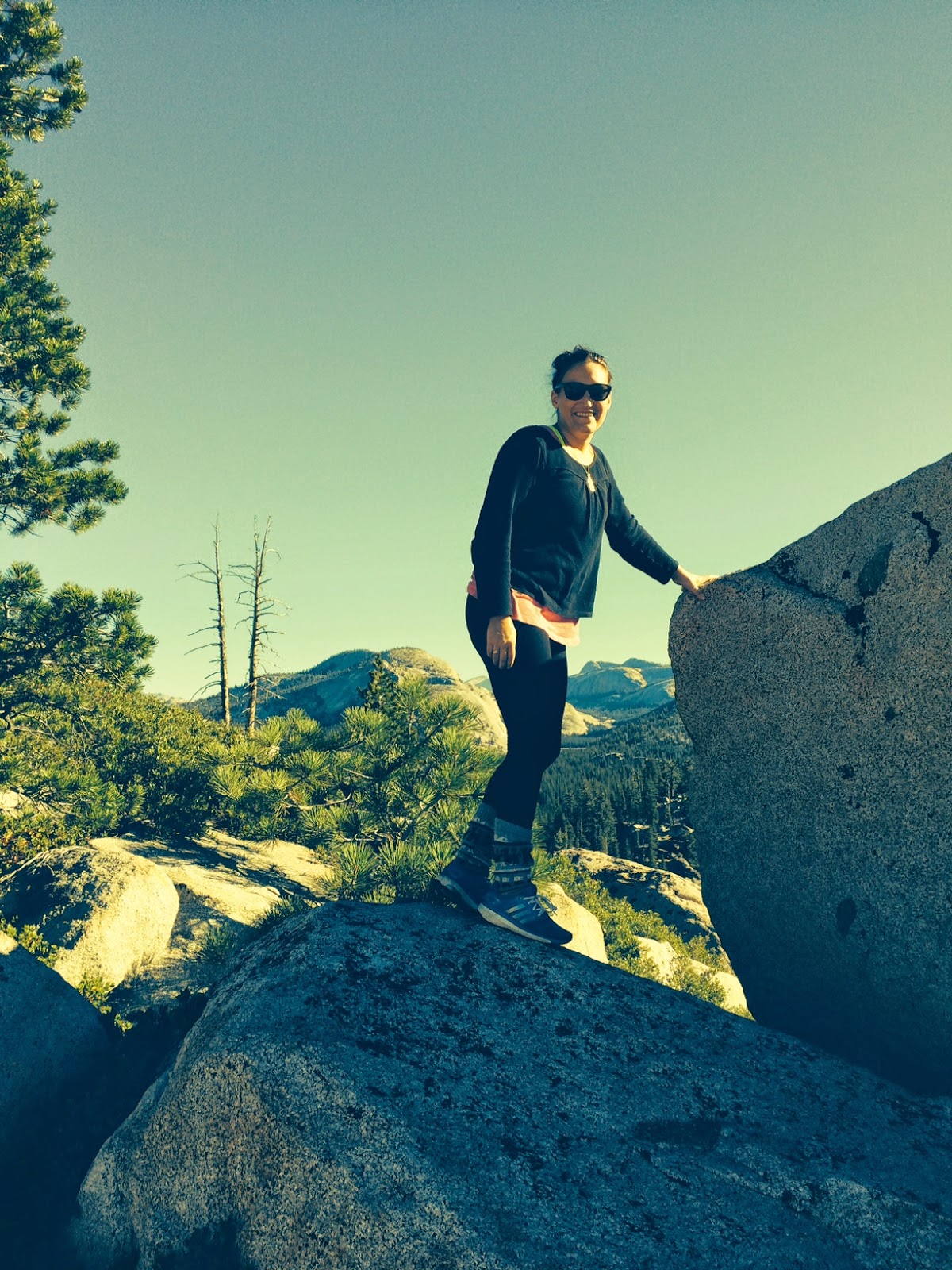 Climbing over boulders while listening to the many different languages spoken from visitors sharing the experience, we became dwarfed by the grandeur like children in an amusement park.   But it was the water that drew us in to go beyond the climbing, and gandering.  Tricia spied a glistening pool of water below snow top cliffs and with her at the wheel, we found ourselves pulling off the road to take better pictures.  The pictures turned into wading, and the wading turned into a dare that ended in a dip in glacier cold water.   We were electrified with laughter and squeals from the cold.  Water, J. Nichols, that replenished our bodies and spirit that the energy we put into helping protect water through countless miles of lost sleep, money spent, and preparation is returned to us simply by being a submerged in clean, cold water.
Posted by theplasticocean.blogspot.com at 7:51 AM No comments: