1 Day of Sampling for Plastics in the N. Atlantic

This is the fourth year Plastic Ocean Project is sampling roughly the same region of the North Atlantic gyre which is also where the longest running deep ocean time-series takes place called the Ocean Flux Program (OFP) headed up by Dr. Maureen Conte our lead scientist. Flux, meaning the variability in material transfer from the surface to the deep driven by the activity between the physical, biological, and chemical processes, and longest running meaning over the past 45 years.  One area in particular we will be visiting is BATS, (Bermuda Atlantic Time Series) where meteorological measurements have been ongoing since 1988.  There is never a dull moment out here.  I was up to 3am processing our 3rd surface sample our 1st day.

It is one of the calmest visits we have had out here, roughly 700 miles of the North Carolina coast.  It looks more like a calm lake than a 3.52 million km salty water-world.  We have seen trace amounts of Sargassum, a free floating golden seaweed, that we like to find in our sampling net so we can also study the ecosystem unique to this weed.  Because it floats as do some plastics, we have long thought it was an indicator – the more Sargassum, the more plastic.  But this voyage has punched holes in this hypothesis.   As our surface sampler skimmed the top 20 cm of water yesterday, the water looked super pristine devoid of natural and man-made debris. I had hope that this sample was going to come out of the water plastic-free. 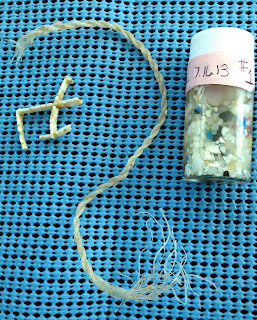 It would be the first in four oceans -210 samples total.  But alas, with less than 102 cm of Sargassum in our net, we found hundreds of plastic fragments along with a 12 cm piece of rope and the presumed piece of a crate about the size of a half dollar that rivals our low amount of Sargassum.  Imagine my disappointment.

The word for this is heterogeneity.  Though we understand that plastics share the same ocean influences as marine biota like plankton, Selps, Copepods, and algae, it does not necessarily mean if there is an abundance of one, there will be an abundance of plastics.  One thing is for certain though, if there is Sargassum, there will be plastics, not so much because Sargassum is an aggregator as much as it all just simply follows the same motion of the ocean.
On a lighter note, as I had mentioned, there are many different types of research going on around the clock.  The fun part has been having Matt Moffett here to not only film this research project for a feature film title, Plastic Seas, directed by Jeneene Chatowski, but he has lent a much need hand to the ongoing setup and deployment of the manta trawl.  You can find a trailer to the film on Clean Canteens website who is also sponsoring the film  www.cleancanteen.com.

Posted by theplasticocean.blogspot.com at 8:34 AM No comments: