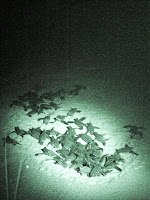 This summer North Carolinians who go through great pains to protect the sea turtles and their babies had a unique experience. A leatherback, not known for laying eggs in NC, laid her eggs 70 days ago on the Outer Banks shore. Last week Jackie Orsulak, a volunteer for NEST (Network for Endangered Sea Turtles), was there for the arrival of some 60 plus hatchlings and recorded the fantastic experience of the them "boiling" out of the sand only to leave their tracks in the sand to the sea. http://fieldtripearth.org/article.xml?id=1488

Essentially unchanged for 110 million years, sea turtles are prehistoric creatures, meaning they've survived the Ice Age and every other major environmental shift since their existence. Leatherbacks are among the oldest creatures on earth and are now on the critically endangered list worldwide. Sadly, one of the major reasons for their demise is our plastic marine debris, according to Dalhousie University's Mike James, who co-authored a recent article in the journal Marine Pollution Bulletin entitled "Leatherback turtles: The menace of plastic." Since leatherbacks prefer eating jellyfish, its widely believed they mistake bags or other plastics for their meals.

James looked back at necropsies over the last century from all over the world and after reviewing the results of 371 necropsies since 1968, we discovered over one third of the turtles had ingested plastic. Check it out, plastics marine debris is responsible for the demise of one of our oldest creatures on Earth.

Look at these little baby leatherbacks and think how many will mistake plastic bags for their number one food - jellyfish. A simple change in our disposal of plastics could help change the fate of these majestic animals. Let's hope there is still time. Here is a photo of one turtle and it's plastic contents. The image retrieved from seaturtles.org 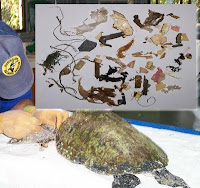 Posted by theplasticocean.blogspot.com at 9:41 AM 4 comments:

The Answer is Yes, Sea Animals Are Eating Our Plastic 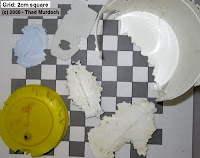 Bermuda BREAM: Bites on Marine Plastic Trash
Thad Murdoch Chief Scientist, BREAM: Bermuda Reef Ecosystem Assessment and Mapping Programme, posted this image and others that illustrate the distinct bite marks I observed on plastic marine debris while I was in Bermuda. If you had any doubt that fish are eating our plastic, this should help you realize that not only are the smaller fish eating the photo degraded plastic particulates, but larger marine animals and reptiles also confuse plastics for food. For millions of years, things that floated were most often edible so why wouldn't they mistake plastic for food. Check out Thad's blog. You'll be amazed. Bermuda BREAM: Bites on Marine Plastic Trash
Posted by theplasticocean.blogspot.com at 3:00 AM No comments:

Being a huge fan of NPR, I wake up to it every morning. It's a much kinder way to start the day than a blaring alarm clock, plus, it usually has something on worth waking up for. Even though I knew it was coming it startled me this morning, while making my bed, when my name shot across the room. Last week, Catherine Welch from WHQR had interviewed Jennifer O'Keefe and me on our trip into the North Atlantic Gyre. Yet another great opportunity to bring awareness to the problem with marine debris and Catherine eliquintally gave it good coverage. Thanks again Catherine for the radio spot.
Posted by theplasticocean.blogspot.com at 6:41 AM 1 comment:

I never knew what scopolamine was until Charlie Moore encouraged me to have plenty of it on hand while out at sea with Algalita Marine Research Foundation (AMRF) this summer. The reason? To beg off sea sickness. I have yet to experience it, but I don't plan on being sick one moment the three weeks out at sea on the esteemed Alguita. She's a ship built to the specification of the captain and designed specifically for long research voyages. She may only be 50'long, but I hear she's a giant against the most brutal of seas. I'll soon find out once I climb aboard 9/6/09 in Hawaii and sail for three weeks through the North Pacific Gyre surveying for plastics.

I'm not going to lie to you, I have my fears. This in-lander from NY has no business being out a 1000 miles from land, but when I saw this photo in the LA Times, I couldn't be more sure about my wanting to join Charlie Moore and crew in their efforts to not only scientifically understand what the human impact is on our oceans, but to inform the general public that we really need to be aggressive in our efforts to heal the oceans. This image is the ultimate in sea sick. This poor animal is ill, removing itself from the ocean, a place it should be alive and well in. But it isn't. Thousands of sea lions are poisoned from our chemicals like DDT and PCBs, banned 30 years ago, yet still linger in our oceans. Because these chemical absorb into fat tissue (blubber) it accumulates in marine animals making them ill and even cause cancer. Furthermore, they are starving because their food is relocating, either from the fish they feed on swimming further out to find cooler waters (hmmm, climate change?) or from our overfishing.

So upon seeing this "sea sick" animal, I've rededicated myself to my pursuit of the plastic ocean and hopefully inform a few, that will inform a few more, that we all can change the damning tide if we decide to change our habits enough to coincide with nature.

Posted by theplasticocean.blogspot.com at 5:19 AM No comments:

Interview on WHQR and the Magic Eye 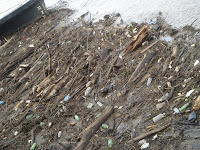 Picture is from Downtown Wilmington, NC after a storm

Jennifer and I just finished an interview with Catherine Welch with WHQR - NPR. It was a welcomed opportunity to tell an audience what we found on our marine debris survey of the North Atlantic Gyre. There is so much to say that inevitably I leave something out. Like the fact that the problem with plastics in our marine environment goes unnoticed because most of it is underwater or broken down into small bits floating on the surface. Not that it takes a trained eye to see it; you just have to recognize that it’s there. Once you do, it likens to the "Magic Eyes" from the 90s. Remember staring at a random series of blotches until an image imbedded in the blotches could be recognized? Once your eyes discovered it, you could always see it. And you wondered why you hadn't noticed at first glance.

Our hope is to have people start seeing the litter on the ground, really seeing the plastic bags stuck in trees or blowing across roadways into ditches. To see that dropping litter out of a moving vehicle often ends up in our storm drains and washed out to sea. Once we all see it, we're more likely going to share the burden of it. We'll secure our trash so it doesn't end up entangling or accidentally eaten by marine animals and birds.

Thank you, Catherine, for giving us the opportunity to talk about the insidious amount of marine debris Jennifer and I witnessed plaguing Bermuda and parts of the North Atlantic Gyre. Hopefully, more people will get the Magic Eye to see the lost or abandon trash on the ground, help remove it, and begin to reduce their amount of plastic use.
Posted by theplasticocean.blogspot.com at 9:41 AM No comments: