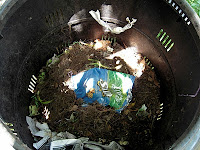 A couple of weeks ago, some one brought a bag of Sun Chips to a friend’s birthday party. The new bags, as you probably have heard, are labeled as compostable.

I've tried composting items labeled as biodegradable or compostable many times, including the misguided attempt to compost hundreds of beer cups from the local Earth Day festival a few years ago. Smaller quantities and thinner items work much better so I took the bag home for another backyard science experiment.

The bag went in on April 20. Since then, it’s ripped once and it’s starting to look a little withered.

Posted by theplasticocean.blogspot.com at 6:28 PM No comments:

Segwey kissing James Dean. Segway is the sea lion we reported on in October that almost died from one stand of fishing line wrapped around her throat. Due to infection and starvation - too weak to find food she nearly died. Its people that can change the fate of our environment and the lives of the other creatures that share it that saved her life. She will be scarred for life, but her recent release back into the ocean serves as an example of people doing the right thing DOES make a difference.
Posted by theplasticocean.blogspot.com at 11:33 AM 1 comment:

Bonnie sent me a link to a video by www.seejanerun.com Looks like a cool site. Her Earth Day post gave me a new favorite quote from Capt. Charlie Moore.
He said, "Refuse that plastic junk. I mean, it's just going to break and make you pissed off anyway."
Happy Earth Day everybody.
posted by Jennifer O'Keefe
Posted by theplasticocean.blogspot.com at 7:08 PM No comments: 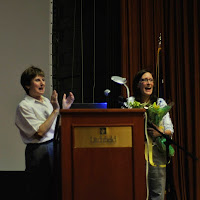 It's been a week for Plastic Ocean. I presented at Tara Theatre in Litchfield, South Carolina on my birthday talking to 220 people of all ages about my experiences in both the North Atlantic and North Pacific gyres and the negative impact of plastic to the marine environment. Thank you Goffinet and Ian McLaren for pulling this event together. My favorite part of giving talks is the Q and A and this group didn't disappoint. One woman stood up and said she had been carrying her own reusable bag around for 25 years because "It starts with me." The audience gave her a round of applause. It was one of those defining moments when someone does something for the betterment of the masses but never gets a voice - those that lead by example. Her sharing this to a large

audience deserved a loud and long applause. I laughed a little inside at the synchronicity of that statement because that same week, I learned of a blog http://itstartswithme-danielle.blogspot.com/2010/04/teach-them-better.html and how apropos that this one line had been honored. My husband used to rant how our magazine titles went from "Life" to "People" to "Us" to "Self" and he felt it was what had been the breakdown in our culture, the lost sense of community. "It starts with me" is a turning point in looking at our selves and how our actions effect not only each other but the world in which we rely on and live in.

Earth Day at Hugh McRae Park in Wilmington, NC brought a huge crowd of 5,000 people. Jennifer O'Keefe and myself had a "Plastic Ocean Project" table amassing the many problems plastics create in the marine environement using pictures of marine life maimed, trapped or died from misguided plastics in the ocean. We had items that we pulled from each gyre -one being the actual bottle we found and freed a fish trapped inside. Other items were samples collected that illustrates plastics fragment making it difficult to go out into these gyres and scoop the plastics out. Our images and display drew a crowd. It was a great opportunity to share and educate -thanks Shannon Culpepper! And my sister Linda Hall who I bamboozled to come to the beach only to put her to work with outreach to this enormous issue. (Pictures by Lloyd Mackall)
Posted by theplasticocean.blogspot.com at 8:03 AM 3 comments:

I had the privilege to speak about The Plastic Ocean Project to the Wilmington chapter of AAUW yesterday. We had a room full of savvy women of all different ages. What I've noticed from the numerous presentations I have given on my personal experience out in the North Pacific Garbage Patch and the North Atlantic is that people are genuinely very concerned about the problems with plastic in the marine environment. Inevitably, at the end, there is always a lot of discussion about solutions. One question was about the biodegradable plastics being produced now and I explained that there are a few concerns about biodegradable plastics. Not that its a bad idea, but like our FDA has hastily approved so many products that have had to be removed from shelves later, we just don't know about the chemical implications. Another problem is, some people will think, "It's biodegradable so I can throw it on the ground." And lastly, the biodegradable plastic water bottles, for example, end up getting into the recyclable ones and degrade the quality of the recycled materials. Here is a video that can give you some ideas on how to reduce, reduce, reduce your use of plastic. BECAUSE that really is the best sollution!

Posted by theplasticocean.blogspot.com at 7:32 AM 4 comments: