Studying Sargassum and Plastic off the North Carolina Coast 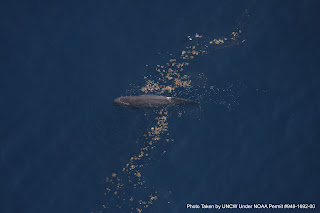 Sargassum, a free-floating brown algae found in the North Atlantic, acts like a dust mop as it collects plastics that float in the open ocean.  Such plastic can have a negative impact on marine life that depend upon the Sargassum.  I grew interested in this the first surface sample we pulled onto the RV Atlantic Explorer in 2009. The collection devise was not only full of Sargassum and plastic, but it also contained an abundance of marine life - an ecosystem of species that live in the seaweed like crabs, seahorses, historia-historia fish, shrimp, barnacles, and an array of pelagic fish that are attracted to it.  From that moment on I have been wanting to take a research team, sampling kits, video and camera equipment off the coast of North Carolina and get into a weed line.   It has been four years and next week, the study commences.  With videographer Jason Andre, boat captain Abram Lambertson, and two marine biology students, we will be pursuing a weed line much like what you see in this picture.  The other beautiful part about this research is the potential of filming marine mammals that are attracted to it as well.
We will be working our way up the coast from Wilmington to Beaufort then head out to sea approximately 50 miles in search of water temperature changes that create convergence zones and form the weed lines of Sargassum.  We will then record the plastic debris we find in the algae as well as the marine life that is associated with the weed line and possibly record interaction between marine life and plastic.

This cruise is the first of a series of four that we hope to complete this summer.  We are looking for people who want to volunteer their boat time. We will fund the fuel.  This research is the first of its kind specifically studying plastic, Sargassum, and the marine life it harbors which attracts juvenile sea turtles, sport fish, dolphins, and other marine mammals that maybe either ingesting or getting entangled in the plastic contaminants.  If interested in helping in anyway, please contact monteleoneb@uncw.edu.
Posted by theplasticocean.blogspot.com at 8:17 PM 1 comment: 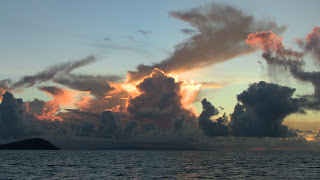 I have been struggling for weeks to write this post.  I cannot explain it.  I know I needed to, but there is just so much to say.  Weird stuff like, feeling totally removed from a simple existence.   Even though I try, I can't come close.  Our fast- paced/instant gratification/convenient society seems light years apart from the more carefree/relaxed/jovial people of Fiji.  Now you know why I've been struggling.   The people and places we visited were like no other I have experienced in other parts of the world.  The poorer communities in South Africa struggled for food and water yet were imbued in plastic trash.  In Fiji, that is not the case.

Loading and unloading 50 bags and boxes of personal items, scuba and camera gear on vans, boats, taxis, and ferries was the hardest part of being in Fiji.  We visited six locations in 15 days, Suva, Salea Village, Kioa Island, Taviuni, Suva Suva, and Wailani LaLa.  Every beach I studied nearly devoid of the plastic fragments, wrappers, soda bottles, cigarette butts, and Styrofoam.  Not that there weren't any plastics, but nothing like what I witnessed in Hawaii, Bermuda, Brazil,  Cape Town South Africa, or Wrightsville Beach, NC.   In fact, for the most part shoes were optional, even adult teams when playing rugby.  People walked most everywhere and when they did, seldom was anyone carrying plastic beverage bottles, or Styrofoam cups of coffee, eating packaged food, or smoking.  It was like taking a giant step back in time.  Back before our over use of one-time use plastic single serving everything.   And the results of being a society still relatively plastic-free bared witness on their beaches.  Even our surface sampler revealed very little plastic.  That said, all seven of our samples still contained plastics but from god knows where.

From my cabin door I looked out and watched as we glided past island after island with communities tucked in the matrix of greenery.  The people of Fiji harmoniously amid the jungle of trees, bamboo, and mossy grasses.  No TVs, no radios blaring.  Children playing outdoors everywhere.

It gave me hope that maybe, just maybe, the Fijians can bypass the use of plastic throw away everything and figure out a way to use their abundance of bamboo to make their packaging.  In fact, while I was there, I shared with several of them my "to-go" utensils made out of bamboo and encouraged them to find alternatives for plastics by using the multi-faceted bamboo. And by doing so they can avoid the use of natural resources like gas, coal, and petroleum, and not have to deal with the plastic stuff that doesn't biodegrade.  Their streets would not be lined with plastics that will eventually wash out to sea.  I told them by doing so they will enjoy their pristine environment a lot longer than we have.  It was like I came from the future to tell them "don't do as we have done." I know that the odds are stacked up against such change, but I can hope, can't I?