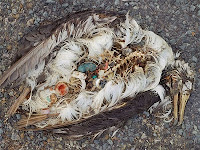 Another good reason why we should reduce our use of plastic. Many people do not know that plastic is made out of petroleum and natural gas. So when you think about the oil spilling in the Gulf of Mexico, think about that oil's potential to have been used to make plastic. Then take it one step further and think about how much plastic ends up in our oceans as well as the amount of oil from this spill. The numbers are staggering.

In 1997, the US Academy of Sciences estimated the total input of marine litter into the oceans, worldwide, at approximately 6.4 million tons per year and that was 13 years ago when the population was smaller. More people, more plastic. 80% of marine debris is reported to be plastics, says Mark Murray, executive director of Californians Against Waste. So an estimated total of 5.2 million tons of plastic spill into our ocean each year. This averages out to be roughly 27 million lbs of plastic entering our oceans daily. BP's skimpy estimation of 210,000 gallons equals 1.4 million lbs daily. Of course, we all know that BP's estimation is askew and the number is much higher. But even if oil is spewing out 10 times faster it still doesn't equal in poundage the rate of plastic. Now I know that oil in water is an even worse mix than plastic, but plastic is entering our oceans faster than this oil spill.

According to the US Dept of Energy, only 4.6 percent of our oil consumption is used to manufacture plastic, not a big number right? The truth is it is roughly 331 million BARRELS of petroleum. That equals 13,902,000,000 gallons of oil, just in plastic in the US. Hmmmm. Imagine if we could reduce our use of plastic to the point that we don't need as many oil rigs.

According to California Coastal Commission, plastic marine debris affects at least 267 species worldwide, including 86 percent of all sea turtle species, 44 percent of all sea bird species, and 43 percent of marine mammal species. Imagine these species contending with yet another petroleum pollutant - trying to swim through toxic oil.

So if we kick our plastic dependency, we just might reduce the demand for oil in yet another way. And, at the same time, protect our oceans.
Posted by theplasticocean.blogspot.com at 10:34 AM 15 comments: 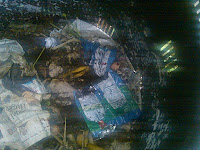 It's been about 3 weeks since the Sun Chip bag went into the compost bin.
Today I stirred the compost, pulled the bag out for this photo, then tucked it back into the hottest part. It looks a little withered but nothing major.
Posted by Jennifer O'Keefe
Posted by theplasticocean.blogspot.com at 5:41 PM 1 comment: