The Plastic Art Exhibit Critiqued at Friend School of Wilmington

Three days after learning our traveling art exhibit won a grant from Project Aware, the art show debuted at  Friends School of Wilmington (FSW).  With two presentations back to back, one for 3rd to 5th and the other to 6th through 8th, these students wowed me with their conservation astuteness.  This was a shared learning experience.  Kudos to FSW, Cameron Francisco, and the Head of School Brenda Esch, the students were extremely informed about environment issues and the impacts of plastic pollution.  I was especially surprised by the 3rd to 5th graders. When I asked if they had heard of the North Pacific Garbage Patch, readying myself to explain, many of their hands went up.  One child explained it in such great detail I thought to myself, "I need him on my team!" 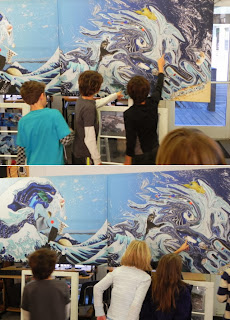 I watched with appreciation as the children looked over the art identifying pieces of plastics hidden in the waves and talking amongst themselves expressing which canvas was their favorite.  They especially took to the last two monstrous looking waves.  What I like best about presenting with the art show is the ability to engage with the audience instead of lecturing using a PowerPoint.  It helps tease out what people do and don't know about plastics.

My big take home was during a game I shared with them using one time use plastics.  The game was "Which Item is a Better Choice? (if you HAVE to use single use items)"  For the most part the students got it, but I did stump them a few times like when I held up in tandum a plastic soda bottle and a Styrofoam cup.  They shouted, "the Styrofoam cup would be better" and when I asked why, they replied, "Because Styrofoam isn't plastic."  Interesting.  It might stand to reason why they would think that.  It doesn't feel like any other kind of plastics.  What an awesome opportunity to clear that up and explain that out of all the plastics we use, Styrofoam readily leaches chemicals so we really shouldn't eat or drink out of Styrofoam if we want to error on the side of safety.  This exercise gave me the opportunity to explain, if you have to choose between the two, take the plastic bottle and make sure it gets into a recycle bin.  Styrofoam is not typically recyclable especially here in Wilmington, NC and it isn't sturdy enough for multiple uses. 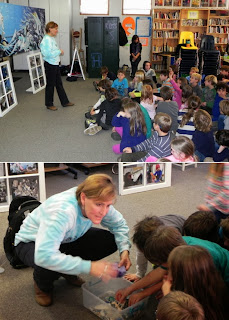 Lastly, I shared with them a bin of plastic fragments collected off a beach in Hawaii. The fragments are the remnents of plastics that either washed out or got lost at sea that became embrittled due to the sun photo-degrading the plastics and the waves busting them up into pieces.  If I had a camera on me, I would have loved to have gotten a shot of all the little hands in the bin of "plastic sand."  Like me, they could not resist studying the fragmented plastic pieces as they tried to identify what some of the pieces might have once been.  With such enthusiasm, I think this research has a future!

Posted by theplasticocean.blogspot.com at 9:16 PM 2 comments:

Thank you Project Aware and Voters, "What Goes Around, Comes Around" Wins Grant 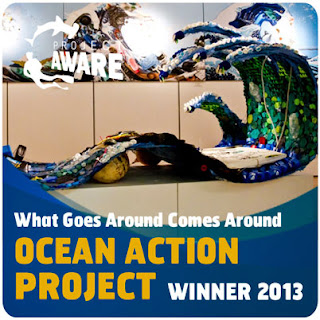 It is rare when one non-profit will provide a contest that helps support another non-profit. This speaks volumes for Project Aware.  Over the past 10 days Plastic Ocean Project's science through art traveling art show has been in an international voting contest.  The votes have been tallied and thanks to so many of you for voting and sharing, POP will have the funding for gas to drive from the east coast to the west, stopping a cities along the way and sharing our What Goes Around, Comes Around exhibit. This show, created out of the plastics collected from nearly 10,000 nm of open ocean research, is full of educational information as well as ideas on what can be done about plastic pollution..  All of the contestants had stellar projects - believe me there are no losers in this competition. Project Aware, we are honored to be included in this contest. We were the only American project selected! 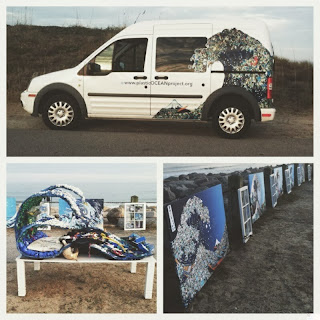 Since our show is to create a wave of awareness across the US, being handpicked encourages us even more that this is a worthy endeavor.  Thank you all for your votes, continued support, and membership to our blog.

On another generous note, where the unexpected financially supports another, please check out an article written about our junior ambassador Annelie Miller in the Mill Valley Patch Newspaper. Read how she not only voluntarily fundraised for Plastic Ocean Project, raising more than $700 for our work, but has been an activist in her school. Thank you again Annelie. You have made a big difference and you are only 12! We are stoked to see such hope through your generation
. 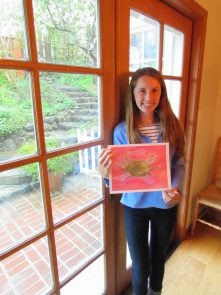 Posted by theplasticocean.blogspot.com at 7:00 AM 4 comments: