In unity with the Christian Day of Resurrection, I feel it is timely that we share our own story of loss of life in an attempt to help those in need and the hope that the losses suffered will one day bring about greater good for many.

For over two years Plastic Ocean Project, Inc. (POP) has been working with Renewlogy (PK Clean) a company that takes non-recyclable, low value plastic and turns it into a high BTU value energy source. Why would we support this? Because after looking at all of the current solutions to plastic pollution, this is the best way to get rid of the plastic menace (second to not using plastic in the first place) turning it back into its basic property - oil. After traveling the world and recognizing that island nations suffer the most from plastic pollution, especially in places like Haiti and Puerto Rico with poor infrastructure for waste management, POP committed to finding the funds to get this technology to regions that contribute to plastic in the ocean, have plastic washing up on their beaches, do not have landfills, and pay a premium for fuel with a huge carbon footprint shipping fuel across the ocean. 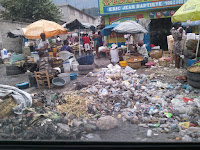 After months of planning, we sent a team of qualified individuals to start the conversation in Haiti. We had been fully aware how dangerous it might be. To mitigate some of the risk, we hired a driver for the week to take the team to various recycling facilities, university, schools, and  a children's rescue facility.  We hired Rehole Polyte, a driver for Build On and also a friend of our Haitian Global POP Ambassador, team member Getro Deliscas. We met Getro through Annie Clark, also a team member and a POP Ambassador that has volunteered for Build On in Haiti as well as Little Footprints Big Steps. Blada Johnson, a Haitian American and founder of Kay Blada - a recycling facility in Henge, also joined the team in hopes that the plastic2fuel facility could also be incorporated into his facility in Haiti. Providing an international experience for an undergraduate at UNCW, POP enlisted Hannah Phillips, a chemistry major interested in plastic2fuel technology and in helping the disenfranchised in Haiti, like her father did many years ago. Our vision was to educate the masses on a way to cleanup their environment, create jobs, and make fuel to generate electricity. I couldn't have been more humbled knowing that we had the funds, thanks to our donors, to send this team to a place that has a huge challenge with plastic waste and in some places living in it.

They arrived on Sunday 3/4/18 in Port-au-Prince, but due to flight issues, got a late start driving into the mountains heading toward Henge. 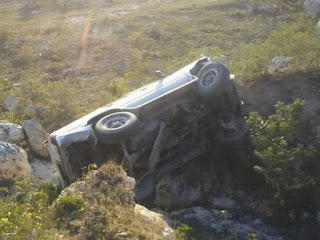 Oddly enough, I had been trying to catch up on work in my office at UNCW when my work phone rang. I looked at the clock, it was 12:32 am. I looked at the screen on my phone and it was from Davis, Davis Clark, Annie's husband. My heart sank into my stomach as I slowly brought the receiver to my head. I stopped breathing as I listened to his wistful voice, "Bonnie, there has been a terrible accident. Annie," then paused composing himself, "has a broken leg and multiple injuries." As he mentioned each person after,  I feared one of them was not coming home alive and indeed, one did not. "The driver was shot trying to swerve around a man standing in the road with a gun ordering him to stop. We believe he was trying to protect the passengers and kept going. The second shot hit him in the head and the car sped forward and off of a cliff." I hung my head as I jotted down the name of the hospital, Blada's Haitian phone number, and told Davis I would call him back after I made a phone call.﻿ 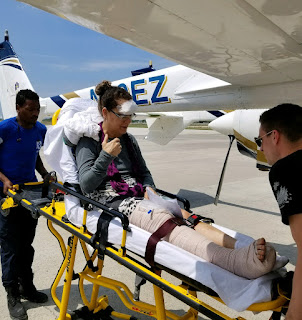 Less than 6 hours into this effort for good, the effort was lost, a person was dead, and our team was in dire straights. Cut off from them except for Blada's cell phone that wasn't working, I called the man whom I spoke with weeks earlier that does relief in Haiti. He said, "If you need me to go pick them up, call me." That man was Dave Walen, a local attorney, pilot, musician, and humanitarian. It was 12:59 am when I texted him, "Dave, it is Bonnie, there has been some really bad things happen in Haiti . . . please, please, please, can you call me, I am going to be up all night." Within one minute, my cellphone rang and moments later, Dave conferenced in Joe Hurston, the founder of Air Mobile Ministries. They spoke calmly and methodically, asking me for as much information as I could give as if they had done this many times before and perhaps why Dave said, "I'll pick them up." We were in the midst of an emergency evacuation.

Dave and Joe fly together bringing supplies as well as water purification systems to Haiti. Joe must have made 100 phone calls lining up logistics on the ground in order to fly to Haiti to pick up our team. In the meantime, Davis was on a 5:30am flight from Reno, NV to Florida to meet up with Joe and then fly to Haiti. Within 48 hours of receiving Davis' phone call, Joe and Davis were in Haiti transporting Annie from the hospital to his plane with Hannah in tow.

So what did happen that night? According to Hannah, the road they were on was frightening. They were in the mountains and could look down cliffs on either side with no guardrails. The driver seemed uncomfortable with the road and the car kept needing water. They stopped a few times to fill up the radiator. Hannah sat in the front seat in a car devoid of seatbelts and Annie sat in the back with her feet up between the front seats with Getro and Blada on each side of her. About 40 minutes into the drive, they could hear some commotion outside before the first shot went off. Ambush. A bullet hit the driver in the shoulder and someone ordered, "Put your heads down." The gun went off again and Hannah heard the driver's head hit the dash. She instinctively put her arms on the dash and her head against her arm prepared for the crash. Annie described it as the scene in the movie, Thelma and Louise as they flew off a cliff. She told me she buried her head into her pillow and screamed in her head "I am not dying here!" Getro remembers flying through the air out the window but lost conscientiousness. Blada expressed his frustration of not remembering anything after the fatal bullet hit the driver as they plunged over 60 meters onto a series of boulders.  Though none of them were conscious, they believe the gunmen and accomplice crawled down to the car and took Getro's backpack with his laptop and clothes, Annie's backpack with her personal affects, money, cellphone, and Hannah's cellphone.

When they came to, no one knew where Getro was, people where helping them into their car, including all of their belongings that were left behind. Hannah recounts coming into awareness sitting in the front seat of the rescuer's car with her backpack strapped to her back and her carry on bag with her. Annie was stretched across the back seat with her broken leg and 4 inch wound on her head bleeding profusely. Hannah reached into her bag and gave Annie clothes to hold against her head as Blada situated their bags in the car and ordered them on to the hospital. On the way they ran out of gas. Blada jumped out of the car to push and soon other Haitians came out to help push the car to the hospital door. Once Hannah got into the light, she realized she was completely covered in blood and went into shock. Blada communicated with the staff as they quickly began treatment on Annie and Hannah. He suddenly realized he still had his phone buttoned in his shirt pocket and was able to get Annie's husband's phone number which brings us to the moment I got the call at 12:32 am.

There have been many losses, pain, and suffering. The driver left behind a wife and three young children. Annie’s injuries were much more serious than the broken leg and 4-inch gouge on her face.  It turned out in addition to a fractured femur that required surgery, she also had a fractured sternum, lumbar vertebra 3 top and bottom, and a rib. Hannah received an injured shoulder, stitches on her nose, leg, and arm. Blada nearly lost his eye and required stitches just above his right eye and Getro, who had no idea where he was when he came to, wondered the dark mountainside until he realized he had his phone and called the police. The police came and got him and he filed the police report. Getro has a broken thumb and injured leg. It is a miracle they all survived and why today is a good day to praise God or any positive entity that was instrumental in protecting our people from fatality. Joe Hurston is a very spiritual man and when he was talking me down from my despair, he told me Romans 8:28, God makes good of everything. We hope that this incident will inspire folks to want help reduce the desperation in Haiti by providing good jobs and energy that will not come from cutting down trees. And we owe a special thanks to Dave and Joe. I learned later that this was the first time they orchestrated a rescue of this kind - another example of divine intervention.

I want to believe that with the help of our Plastic Ocean Project supporters, we will not let this stop the good we want to accomplish in Haiti. Annie said, "I would like you to know that this trauma, as horrific as it was, does not spoil my feelings for the  Haitian people or their need for help. It’s only desperate people who commit such acts and I have only compassion for them. " Hannah shared the most beautiful stories of how the hotel across from the hospital not only let her shower to clean the blood and glass out of her hair but stood guard of the entire hallway where her room was so no one, not even the patrons, could go near her to make her feel safe. When Getro and Blada took her to places to eat, people wanted to know why she had black eyes. They would tell them in Creole, "These people from Plastic Ocean Project came here to help us and this is what happened." They would share the story of plastic to fuel and how they all suffered because of these desperate souls in Haiti, and the listeners fired back, pleading with Hannah not to give up, to come back and do the great work they set out to do and that those bad people do not represent the good people of Haiti.

Before we can think of continuing our work, we would like to ask our supporters to consider donating to our GoFundMe to offset the expenses to our team for medical bills, the fuel for the plane, emergency airfares, the items stolen, the car destroyed, or donate to Airmobile Ministries and include a comment "to help support the driver's wife."

Here is our GoFundMe Campaign: https://www.gofundme.com/RecoverLossesFromHaitiProject