Back into the N. Atlantic Gyre

It's been almost a year since Jennifer O'Keefe and I hopped a ship of opportunity (BIOS Atlantic Explorer) out into the Atlantic 700 miles off the coast of Wilmington. What we found in our samples emulated that which is found in the N. Pacific Garbage Patch. Small fragments of photo-degraded plastics, bite size for the small marine life that live in the Sargassum. We also witnessed Michael Gonsior release a trapped six inch trigger fish from, of all things, a motor oil bottle. And then there was the 12 foot radar that could have done damage to our ship or sank a small vessel if we hadn't removed it from the open ocean. It took over an hour, but we were able to retrieve the 200+ lbs. marine debris. Large objects, like this one, are able to float due to airtight plastic housings.

We'll be back at it again starting July 3rd. Check in to see what we find! And thanks goes out to people like AAron and Danielle Richardet who have not only helped promote our work, but have financially supported us as well. Kudos Richardet family!
Posted by theplasticocean.blogspot.com at 8:46 PM 6 comments: 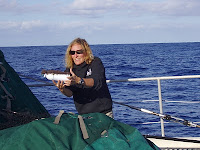 That's what I'll be talking about at Bonnaroo. Representing Algalita Marine Research Foundation, I'll be discussing the plastic and oil cocktail our oceans are O.D.ing on and what we can do to help the detox efforts.
Petroleum is killing our oceans on many fronts - through our burning fossil fuels causing ocean acidification, oil that spills into our oceans daily (scores of rigs and ships spill on top of the slow motion disaster in the Gulf), and then there's the 27 million lbs of plastic (which is made out of oil) that enters our oceans daily. All of which kills sea life from phytoplankton to coral to several ton whales. This should give you some idea why I've been out to the North Atlantic and North Pacific "pluckin'" plastic. Day in day out, 27 million lbs. of discarded plastics enter our oceans.
I'll be in Bonnaroo talking about how we plucked plastic from two ocean gyres.You can pluck the plastic too by refusing it every chance you can and when you do, you tell the oil companies you don't want their oil. Less demand, less reason to be drilling. Pluck plastic.
My venues at Bonnaroo:June 12 - Rock the Earth Panel Discussion "Social Change through Music" Solar Stage 1-230 and Cinema Tent Q and A with Ryan Stasik 2:30-4:30.
Hope to see you there.

Posted by theplasticocean.blogspot.com at 8:32 PM 5 comments: 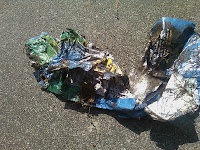 Today marks 7 weeks of Sun Chip composting, so we're halfway there! It's been ripped a few times while I turned the compost and it now looks like there are two layers that are separating, one is clear and one is more like foil. I fished it out for the photo, then tucked it back in the middle of the pile where it is smokin' hot.
posted by Jennifer O'Keefe
Posted by theplasticocean.blogspot.com at 7:39 AM 1 comment: