All is not quiet on the western plastic ocean front!

Many of our followers are keen to our traveling art exhibit zigzagging across the country stopping at various cities along the way. The 25 feet of ocean waves has helped bring awareness to the pandemic of plastic pollution. We have met so many caring people along the way, many unaware that become extremely interested in the discussion. We just hit an epic location in Boulder Colorado, UCAR, on top of the Rockys but those stories can wait because this one shared by Linda Leitch from Canada is worth stopping everything for to read, learn and help. 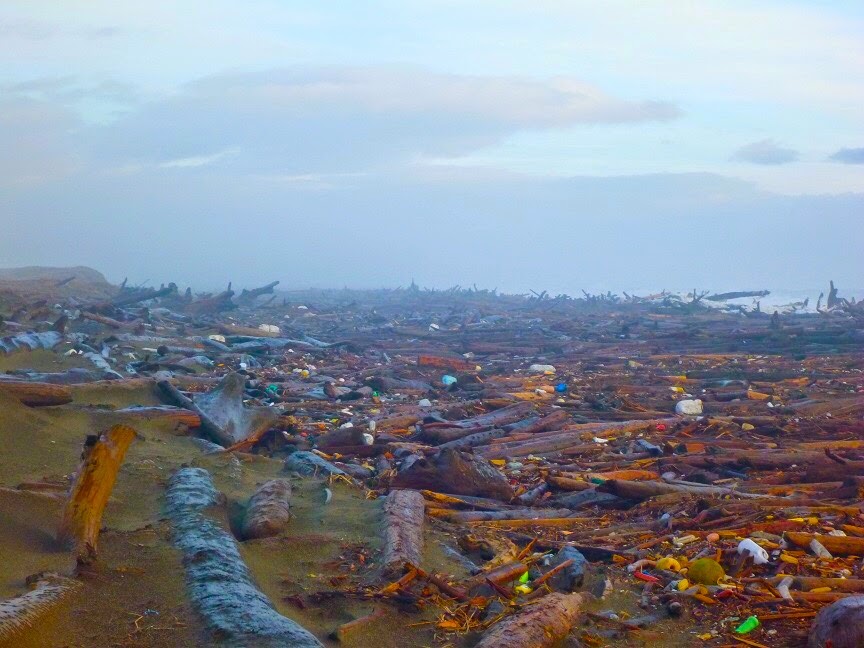 The beaches on Haida Gwaii have always been a magnet for the flotsam and jetsam that circles the Pacific. The archipelago sits off shore from the mainland and reaches out into the currents and wild winds of Open Ocean. Some beaches collect the debris and display it for a while and then it’s simply swept back into the sea to continue its journey, but some beaches here hold on to the debris and do not let it go.
In the last few years we’ve watched with alarm as our favorite areas started to collect devastating amounts of new debris. A beach known simply to the locals as “East Beach” was being hit particularly hard, the belly of this beach is exposed to Hecate Strait and all her wild personality.

East Beach is our backyard playground. This paradise is where we draw sustenance into our lives. It’s where we hunt deer, collect firewood, pick berries, and gather shellfish. This playground extends from the tip of RoseSpit Ecological Reserve, all the way through Naikoon Provincail Park and is accessible only by 3 day hike or with the serious use of 4 wheel drive vehicles.

Very few people will dare to navigate this shore by vehicle forit’s extremely remote and the potential always looms near that the beach will leave you mired while the tide creeps in and claims your vehicle. It takes a special skill set to drive out here, a kind of built in sense for where the beach will have hidden obstacles and soft spots. My partner Dann has been perfecting these skills since childhood, but still we have the occasional white knuckle moments. 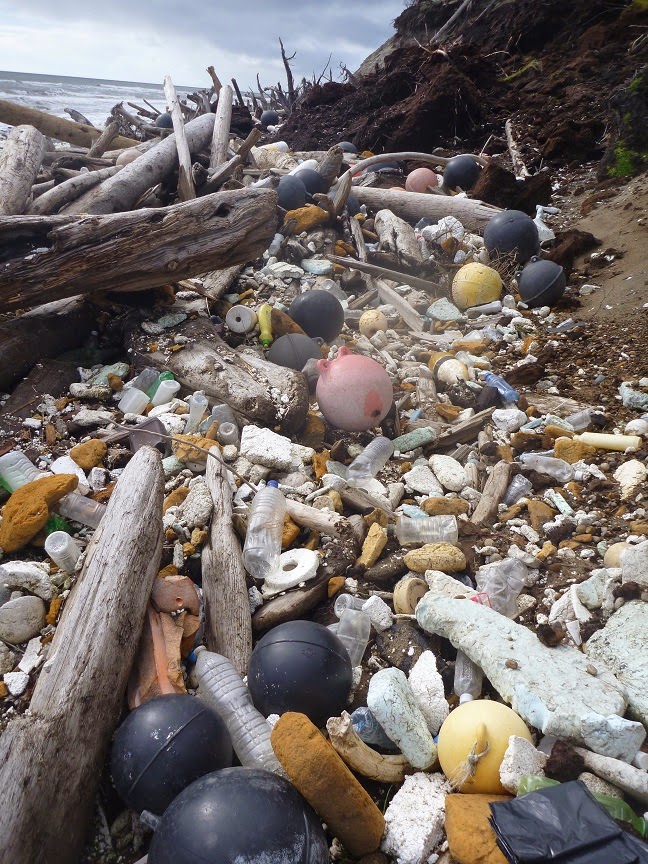 Watching the garbage flood our home was unbearable and we were forced into action.
Using our trusty rusty pick-up and a small trickle of funding provided to Canada directly from Japan we started to take truckloads of debris off the beach. This is no easy task. We work as weekend warriors, camping overnight in all conditionsbecause the distance we travel is far and difficult and often dictated by the tides.

Sometimes we enjoy glorious sun filled days with sparkling calm waters beside us and sometimes we battle our way down the beach in dark cold storms that dump water and flood the creeks blocking our passage. There are times when the beach is perfect and firm for driving that have been balanced out by days when we are stuck knee deep in muck prying the truck out of the mire with our bare hands, but we ultimately always get moving again and we have never considered giving up.

To make the most of our time and funding we load our truck to comic proportions. Often I’ve described our truck on its way home as a “fortune telling gypsy wagon put together with marshmallows by a drunken Dr. Seuss.” Such are the oddities we carry.
As well as bringing the garbage off the beach we’ve documented what we carry and set up monitoring sites along the way to begin to gauge the amount hitting our shores for the future. This is important information that has never been collected here before.

The debris is dominated by Styrofoam varying in size from blocks that dwarf the truck to tiny microbeads of mess. Behind the Styrofoam are bottles of every shape size and purpose, fishing gear, and tiny ground up bits of plastic that maybe used to fit together into something useful, but are now an environmental hazard embedding into the shoreline and being eaten by the wildlife. 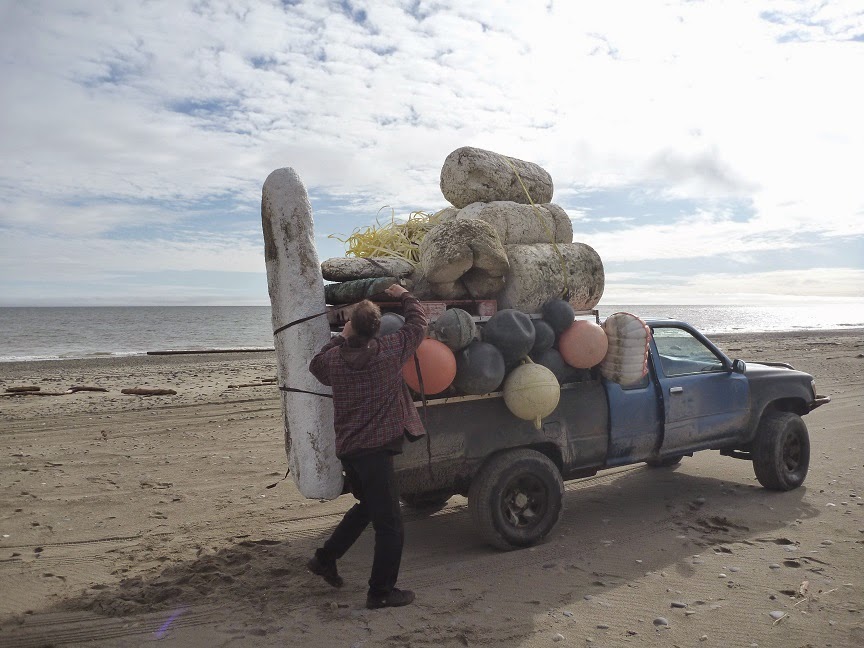 After bringing in 62 loads of debris over an 18 month spanwe’ve exhausted our funding, while more garbage than ever is swamping our shores.
It was exceptionally kind of Japan to donate to Canada their humble offering after they were devastated by a tsunami, knowing that tons of debris would make its way across the ocean landing on our soil.
It is with the same respect I reserve for family that I pick up the ripple effect of problems from that day.

However, garbage has been a problem here long before 2011, and the increase in garbage that we’ve been finding and piling into our truck has not been entirely from Japan.
There is a horror show of irresponsibility unfolding in our ocean from countries all around the Pacific. Often we find things with markings that indicate their country of origin. We’ve found things from Chile, Philippines, Korea, Russia, China, United States, and Canada mixed into the debris.

This is a problem that connects all countries and cultures living around the Pacific Rim together. This is a problem that will need us all to act together to change our habits and lifestyles. It’s up to every country and every individual with in each country to help out and work toward change.

As I am a Canadian, I feel exceptionally let down by the lack of response from our government in particular. We are cleaning in an Ecological Reserve and Provincial Park, places that we, as a country, decided long ago deserve protection. Sharing this archipelago, though further south of us, is Gwaii HaanasNational Park Reserve which is home to many culturally significant heritage sites to the Haida people. They, too, were operating cleanup projects with the funding from Japan and have also exhausted that funding, without any of the problem being solved.

My partner and I are not radical environmentalists, and may not be the typical type of people you would find having passion for this problem. We are simple folks, maybe even a little reclusive,but this land is our garden, this ocean is our larder and so this problem belongs to us as much as anyone.

As a temporary measure, until further funding is found I’ve started a gofundme page with the hopes we can keep our truck rolling down the beach clearing this paradise landscape of harmful plastics.

Any help is appreciated. Share the link with friends, donate, use less plastic, and clean debris from our waterways every chance you can. By Linda Leitch

Posted by theplasticocean.blogspot.com at 4:34 AM No comments: